Home » Our Doctors » Dr. Paul Cook, O.D., Diplomate of the American Board of Optometry 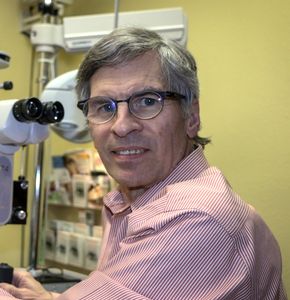 Dr. Cook graduated from Wofford College with a Bachelor in Biology, received his Optometric degree from the The Southern College of Optometry in Memphis, TN, and attained the credential of Diplomate, American Board of Optometry. His specialties include emergency care for eye injuries and conditions, contact lenses, diabetic eye care and glaucoma.

Dr. Cook grew up in Spartanburg, SC, and spent his childhood swimming at the local pool, catching fireflies in mason jars, helping pick peaches, working in his father's garden and eating Southern-style grits and country ham! His family's big vacation was to go to one of the beaches such as Myrtle Beach or Foley Beach.

When asked what made him specialize in his field, he said, "My father is a dermatologist and I knew how much he enjoyed his work and how much his patients appreciated his care. I knew I wanted to follow him into health care but was not sure in which direction. After graduating college I took some time to travel the country and think about what my next step would be. I ended up in Aspen, CO, where I met some optometrists on an elevator. They told me how much they liked their work and what an interesting field it was. It just clicked at that point that I wanted to pursue optometry."

His favorite patient story is unique: "When I was quite new out of school I had a practice in Glenwood Springs, CO. One fall day I had a particularly talkative young woman come in to see me. She was so friendly and outgoing that before I knew it we had plans to go bike riding together. You know she never did pay for that eye exam or her contact lenses but I am happy to say that she has been my wife for 33 years."

In his spare time Dr. Cook takes advantage of all the mountains of Colorado offer including skiing, snowshoeing, hiking, road and mountain biking, water skiing and playing outside as much as possible. He's also interested in local politics and is an active member of The Church of Jesus Christ of Latter Day Saints.

He and his wife Karen will be celebrating their 34th anniversary in July. They have five children as well as a collie named Fenley who, according to Dr. Cook, is the most obedient member of the family.

Please call before coming into our office. Our hours are subject to change at this time.